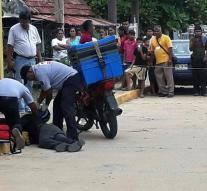 In an attack of a armed command in the port city of Coatzacoalcos, two adults and four children were killed. In a restaurant in the city of José Cardel two police officers were killed and two agents injured. In another city, two women came through violence for life.

'The organized crime is responsible for the violence problems in Veracruz,' said Veracruz Governor Miguel Ángel Yunes in a video message. In the region several criminal syndicates fight the power.