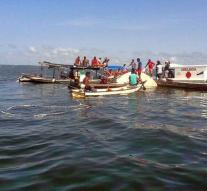 rio de janeiro - In northern Brazil a ship has sunk with seventy people aboard. Ten bodies were found, according to the authorities. 25 people managed to reach the sandy banks of the Xingu River. Another 35 people are missing.

The ship was on its way from Santarém to Vitória de Xingu. The cause of the accident is unknown. According to local authorities, the captain was not allowed to transport passengers, but the ship was intended for freight.