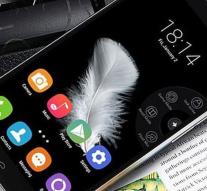 - An empty smartphone is a big annoyance for many users. The Chinese manufacturer Oukitel comes with a smartphone that as many as ten to 15 days longer.

The Oukitel K10000 has a battery of 10 000mAh. In addition to that it is enough to use the smartphone itself days intensive, it can also be used to load other gadgets. According to the company, the battery is large enough for the iPhone 6S three complete charge.In addition to a powerful battery, the device has a 5.5 inch screen with a resolution of 720 x 1280 pixels and runs on a 1GHz processor. The memory is 2GB and 16GB of storage memory can be expanded via microSD.The K10000 runs Android 5. 1 and has an 8 megapixel camera on the back and a 2 megapixel copy on the front. A price tag on the unit hangs from $ 240 (€ 218).
NEW