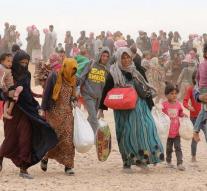 london - Rich countries shirk according to Amnesty International in the global refugee crisis on their responsibility. Of the 21 million refugees, more than half caught in the world in ten countries which together account for only 2.5 percent of the global economy.

Not the number of refugees in the world is the problem but the fact that many of the richest countries recording the fewest refugees and do the least, says Secretary General of Amnesty International, Salil Shetty.

Jordan has absorbed most of the refugees of 2.7 million people, followed by Turkey, Pakistan and Lebanon. Many migrants live there under extremely precarious conditions.