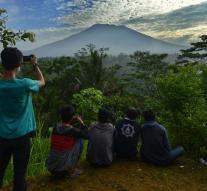 denpasar - Ten thousand inhabitants of the island of Bali have evacuated from villages around the volcano of agung. Almost 10,000 people left their homes on Friday, according to the AFP press office, there are now more than 34,000. It is feared that the Agung can burst at any moment.

'Volcanic activity remains high and there are indications that lava rises and causes earthquakes,' said a spokesperson for the National Disaster Response Service. The shocks that are felt are becoming more and more powerful. The highest alarm phase is currently in force.