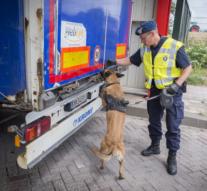 rotterdam - Ten chattering mouth-Albanians Thursday night in the Europoort in Rotterdam during a check by the military police from a working refrigerated trailer full of fruit removed. They thought hidden to travel between the cold cargo ferry to Hull in England.

The men said to have been very cold, the trooper reported Friday, but they are in good health. The 27-year-old Romanian driver was arrested on suspicion of human trafficking. He was arraigned Tuesday on the magistrate.

The Albanian men between 19 and 37 years and go after questioning the immigration path.