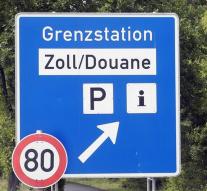 berlin - Germany has temporarily re-established border controls in connection with the forthcoming G20 summit in Hamburg on Monday. The measure has been taken to prevent potential violators from entering the country, said the Interior Ministry.

The border controls are tailored to the neighboring countries and the European Commission. They last until July 11, depending on the situation, and are 'flexible in time and space', according to the Ministry. In the Schengen area, internal border controls have in principle been abolished, but exceptions can be made at major events.

The G20 summit takes place on 7 and 8 July. Around the meeting, strict security measures are taken. It is expected that more than 100,000 people will be demonstrating against the conference on July 8th.