Home / Tech / Tele2 comes with its own shops in Netherlands 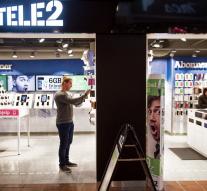 stockholm - Tele2 is in the Netherlands open their own stores. The Swedish telecom bursting with ambition and will in a few years have owned a fifth of the Dutch mobile market. Now that the market share of Tele2 in the Netherlands, according to the company have between 7 and 8 percent.

The first store that include cell phones and subscriptions to the man will be, will open before the end of the year the doors. Details on the number of planned stores and the first location is at the moment not yet made public.

Tele2 is quite on a roll to roll out its own 4G network in our country. This allows the company its first 4G subscriptions will also introduce earlier than planned. Many existing customers can already use the new high-speed network.

The coverage of the Dutch 4G network has now reached 90 percent. Tele2 puts in the fourth quarter from 100 to 200 million kronor (the equivalent of nearly 11 to more than 21 million euros) in the net to further accelerate the rollout. End of first quarter next year, the company expects to achieve nationwide coverage. In connection with the acceleration Tele2 Wednesday its profit forecast even reduced. Tele2 is facing in our country with high costs because of the greatly increased data usage.

Group-wide was also talk of sales growth. Especially in Kazakhstan Tele2 managed to increase revenues. Since the company has now almost 4.4 million customers, more than 4 million home market in Sweden. Net profit however was significantly down. It came came last quarter, nearly half (45 percent) lower than a year earlier, to 397 million kroons.