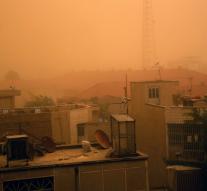 tehran - Schools in the Iranian capital Tehran remain closed Sunday and residents have been strongly advised to stay indoors, because there is a thick layer of smog over the city. Sunday schools remain closed in places in the province.

Iran has suffered from air pollution, partly because there are a lot of old cars and because the adherence to rules on emissions are not controlled. The main source of air pollution are the engines and cars which the catalyst is removed , said the head of the health organization against the state news agency IRNA.

Tehran has 12 million inhabitants and lies in the shadow of the Elboersgebergte. That ridge prevents the wind can blow away the pollution.