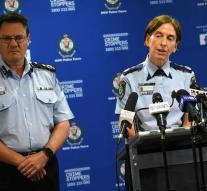 sydney - In Sydney, Australia arrested two boys of 16 years old. They would have to commit a terrorist attack. The teens were arrested by the NSW Joint Counter Terrorism Team.

They had two 'large bayonet-style knives' in their possession which they had bought earlier in the day. They also had religious notes bag in which they swore allegiance to Islamic State. According to ABC news is one of the two boys, the son of a convicted terrorist.

The trial started in December. If they are convicted, they could get a life sentence..