Home / World / Teens in the cell after filmed abuse 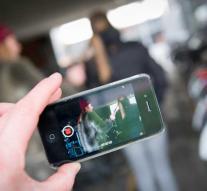 birmingham - The British police have arrested three teenagers after images of the abuse of a girl were distributed through social media (15). The video images have been viewed more than 330,000 times on the internet, reports the local newspaper Birmingham Mail.

In the video you can see how the perpetrators kick the roster in Birmingham, hit and drag across the street. 'The victim was attacked by a group of girls. She suffered bruises and swelling, 'reports the police. Who told a boy and two girls to have stopped. The suspects are between fourteen and sixteen years old.

A local entrepreneur has started an action to give the victim a heart. This resulted in 218 pounds (almost 250 euro) in just a few hours. People also donated vouchers for free meals and beauty treatments. 'It really touched us. I felt sorry for the girl and wanted her to smile again, 'said the initiator.