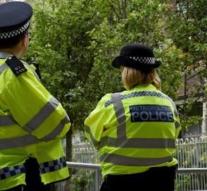 According to the London police, five different attacks with a corrosive substance were found in the UK's capital within one and a half hours. The victims were transferred to the hospital. One of the victims has suffered profound injuries.