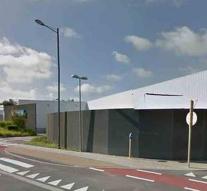 brussels - A 17-year-old South African boy has confessed that he raped an equally old girl killed after a roof had fallen. 'I did not want her to suffer unnecessarily,' was his defense.

The horror murder took place in June at a branch of Decathlon in the Brussels municipality of Anderlecht. Police found the body of 17-year-old Thaynara da Conceição in the bushes in the parking lot after the accused herself had given up as lost.

Initially declared the boy that the two had sat on the roof of the store and that the girl had fallen down. Then he would have gone home in a panic.


Now the boy tells a different story, however, reports Het Laatste Nieuws. After Thaynara fell- he insists he has not pushed her- he checked that the girl was still alive. He saw that she was bleeding in her face, but she was breathing clear.

Then the boy dragged the girl into the bushes. He undressed her and raped her. 'Suddenly she stopped breathing,' he said according to the newspaper. 'I thought she was dead, but quite completely sure they would not suffer unnecessarily, I strangled her with her necklace. '

The boy, who has become now 18, is stuck in a closed institution. He was already familiar to justice because he had beaten a girl. Also another girl says he tried to abuse her when she had drunk too much. Also on the roof of the alcohol Decathlon there was in the game.