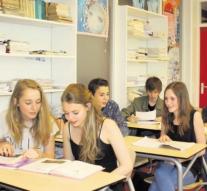 the hague - Bridge class pupils are called on to invade the bacterium 'meningococci W' next year. Minister Edith Schippers of Public Health has decided because the bacterium, which can cause meningitis and blood poisoning, has been around for a year.

Also 14 months old babies get the vaccine over the course of next year. They are already vaccinated against another type of bacterium, but that vaccine is replaced by an agent that also protects against the W-variant.

The meningococcal bacteria is found in many nose or throat subjects without causing any harm. However, if the pathogen enters the blood, dangerous conditions threaten. Especially babies, teens and the elderly are vulnerable. By vaccinating those first two groups, Schippers also hopes to lower the risk of infection to others.