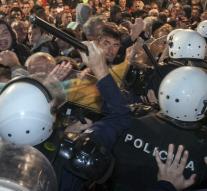 - The Montenegrin police to use tear gas Saturday to disperse anti - government protesters . Hundreds of supporters of the opposition party Democratic Front had gathered at the parliament building. They demanded the departure of Prime Minister Milo Djukanovic .

The demonstrators had already put down twenty days ago tents outside the building. After agents tents Saturday morning had been removed, was called to protest the evening. In addition, it came to a scuffle with the police, inter alia, with bottles thrown . In the subsequent batch of agents was beaten opposition leader Nebojsa Medojevic among others to the ground. He was lightly wounded.