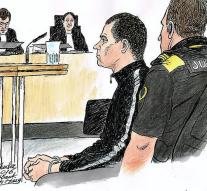 - Johannes (Jan) R. has the court in The Hague hospital order with compulsory treatment for an unlimited period were imposed for brutally killing the 82-year-old Elbert Geveke in prison in Zoetermeer. R. Monday was present at the verdict.

R. is completely insane, schizophrenic and should be treated long and hard, was evident from the reports of two behavioral scientists who examined him. The Public Prosecutor (OM) had demanded therefore no jail time. Also R. lawyer had during the trial of the case two weeks ago deployed a treatment instead of imprisonment.

R. was last year in prison in Zoetermeer, where he was in custody that included a violent scooter theft and stalking of musical star Chantal Janzen.