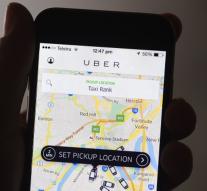 - The questionable taxi service UberPOP stops in the Netherlands. Technology Uber late Wednesday that the taxi service from Friday afternoon will no longer drive. UberPOP to transport individuals in their own car people surcharge.

The reason to pull the plug, according to the company because the service is an obstacle to a constructive dialogue on the modernization of laws and regulations. Uber finds the decision " disappointing for the hundreds uberPOP directors, who in recent months have been able to generate additional revenue through the uber platform.

UberPOP is illegal. At each time it was held UberPOP driver, the company had to pay a fine of 10 000 euros. The Public Miniseries occurred in September raided the office of Uber, because it is suspected of violating the law ' 2000 Passenger in an organized context.

Uber continues to be active in the Netherlands with services UberX, Uber Black and uberX.