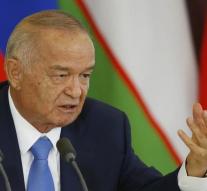 - Uzbek President Islam Karimov (78) is deceased according to diplomats and the Turkish government, who could know, but the leadership remains silent in Tashkent as the grave. Tashkent appeared late on Friday to confirm with an official statement that Karimov had died as a result of a stroke. But later announced the press service of the Uzbek government that they had spread a message that the president's death was confirmed.

Diplomatic sources reported earlier in the day all that Karimov was dead and Turkey had already condolences ethnic Uzbeks related. Georgia has also Tashkent condolences. The authorities in Tashkent reported merely that Karimovs deteriorated health.

Numerous regional Internet media reported during the day on preparations in Samarkand, 250 kilometers southwest of the capital Tashkent, for the funeral of Karimov. He comes from the city and is said to be buried Saturday in a family tomb.


Karimov Uzbekistan already ruled independently since the former Soviet republic in 1991. In the five Central Asian Soviet republics in the region were in those years generally brutal autocrats in power. Karimov was, according to observers, the most ruthless and paranoid ruler among them. Human rights organizations described the torture and death of dissidents as,, ghastly '.

It is possible that the officially still a power struggle unconfirmed death of Karimov unleashes between various clans. The Karimov family clan would remain first in power with the eldest daughter, Goenara Karimova heads. But she is put on a siding in 2014 after to have caused a scandal. Among the figures that would help maintain the corrupt regime of Karimov, according to observers, his younger daughter Lola, Sjavkat Mirzijojev prime minister and intelligence chief Rostam Inoyatov.