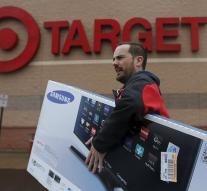 - Target has reached a settlement of 39.4 million dollars (37 million euros) with banks and lending institutions that were affected by its huge data breach.

The company hopes the separation to eliminate the aftermath of the data breach in 2013 with data from approximately 40 million credit cards came to be on the street. Earlier this year, arranged with Target credit card issuer Visa for $ 67 million (63 million) and attracted $ 10 million (9 million) for aggrieved customers.Until the settlement that was struck Wednesday also includes an amount of over 19 million dollars (17 million euros) for the banks issuing MasterCard passes. An attempt earlier this year failed to comply with Mastercard.The shop is thus not yet certain of the handling of the case; although the court the supply of Target as reasonably labeled, the proposal still needs final approval. That will happen on May 10, 2016.
NEW