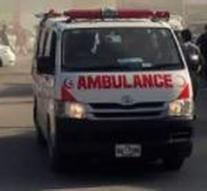 lahore - The death toll due to an accident with a tanker in Pakistan was raised to 206 on Monday. Dozens of casualties are still in hospitals, saying medical sources against Pakistani newspaper Dawn. In many cases they are ill.

The tanker crashed on a highway near the Pakistani city of Bahawalpur (Punjab) a week ago. The tilted vehicle exploded while a large group of people were collecting leaky fuel. Immediately 150 people came to life. More than one hundred bystanders burned up.

The cause of the drama has not yet been announced, but according to police sources, the overweight driver of the tanker dropped behind the wheel. Then the car was tilted. The explosion was possibly caused by a spark of one of the vehicles with which residents were escaping to the scene of the accident.