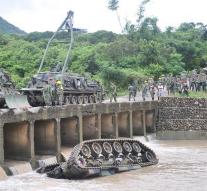 - A Taiwanese tank Tuesday in a three-meter high bridge occurred during a military exercise. Three soldiers were perished in the tank.

At the time of the accident there was significant rainfall. Due to a technical fault could send the driver in time to the left, according to the military.

Aboard the CM11 tank were a total of five soldiers. The driver could bring themselves in time to safety. The commander was with the other three soldiers unconscious removed from the wreck. He arrived alone in and was taken to the hospital.


The accident happened in the run-up to the annual Han Kuang military exercise next week in which the Taiwanese army is preparing for a possible attack by China.