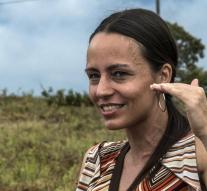 cartagena - Tanja Nijmeijer Colombia to help the next time \'building a better society.\' Monday's historic peace agreement is signed that puts an end to more than fifty years of civil war.

The Dutch member of the FARC said in a radio interview that the VPRO Friday exceptions they aspire to a political career, but ' if you must, you must. \'

Nijmeijer belongs since 2003 to the armed rebels and made in recent years as part of the delegation which conducted the peace negotiations in Cuba with the Colombian government. A return to the Netherlands is not in the short term because it is on the wanted list of Interpol, thus risking extradition to the United States.

' I would be able to, again Dutch to hear around me, to see the scenery fine find Netherlands, but especially my family. \'

Nijmeijer see the future in her chosen second country in South America with confidence back through the amnesty that was agreed for FARC fighters who have not committed crimes against humanity. ' People can say what they want, but you know yourself what role you played. I have my conscience really clean. \'

To make the transition from a banned organization to a political possible FARC must lay down their arms. Nijmeijer told totally have no problem sacrificing her rifle, years ' an extra body \'. ' If it is proven that political participation is possible and that there are no more threats are from outside we do not need more weapons. They are a heap of iron. For us it was an agent in a certain period to save our lives, to defend ourselves. \'\n  \n  \n   advertisement

Which in the legal agreement for its personal, non-Colombian is going to mean, is not yet clear. ' At the moment we are engaged in discussions. I'm not the only foreign. Our lawyer advises not to talk about it. \'