Home / World / Talk about Mosul without Iraq and Turkey 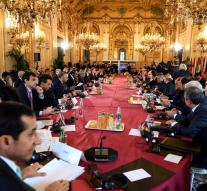 - The summit meeting Tuesday in Paris is driven on the future of the Iraqi city of Mosul as Islamic State, will take place without representatives of Iraq and Turkey. Both countries do not participate in the talks between approximately ten defense ministers.

The governments in the Turkish capital Ankara and Baghdad are at loggerheads over Mosul. Turkey sees for itself an active part in the offensive in Mosul and said that it has already slain by shelling several IS fighters. It's against the sore spot of the Iraqi government, which wants no Turkish involvement in the offensive on the last major bastion of IS in the country.

The meeting will mainly defense ministers from Europe and the United States consult with each other. Last week also said all the foreign ministers of several countries in Paris together on the future of Mosul.