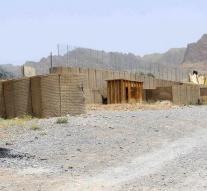 cabul - Again, Afghan rebels have attacked a military base in Kandahar Province. Thursday evening, fifteen soldiers were killed, a spokesman for the Afghan Ministry of Defense told the BBC on Friday. Five others were injured by the Taliban attack in the Shahwali Kot district.

Four days ago, the Taliban attacked another army base in the same region. Then at least ten soldiers were killed and nine were injured. The government forces in the Achakzai camp fought back and killed at least twelve attackers, the defense spokesman said.