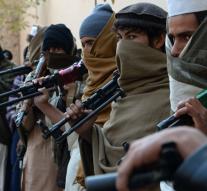 kabul - Dozens of Taliban fighters Saturday fleeing government troops stranded on an island in the Amu Darya river, on the border between Afghanistan and Turkmenistan. According to the Afghan government, the fighters can not move. The Taliban denies this.

According to a government spokesman fighters left their bikes behind on the shore and they made with fishing boats crossing to the island. " They have no choice but to surrender or starve ", said the spokesman.

According to Taliban fighters have the island just as the basis chosen for the fight against government troops.