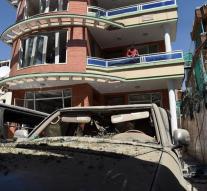 kabul - The Taliban say they are responsible for the attack on the office of the charity Care International in Kabul Monday. The militants have declared it on Wednesday.

Three attackers holed up at the office in the wealthy neighborhood Share Naw. Afghan security forces were able to kill the trio in a shoot-out that lasted eleven hours. The center of the Afghan capital was sealed off all the time. Besides the three dead attackers killed at least one other dead and six wounded.