Home / World / Taliban attack on the Spanish Embassy in Kabul 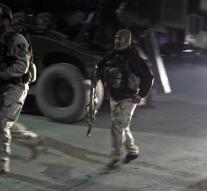 kabul - The Taliban in the Afghan capital Kabul attacked the Spanish Embassy. Which have been reported to the authorities in Afghanistan and Madrid.

The Taliban said they had left a car bomb explode near the embassy and that there is locally still fought. Witnesses speak of a heavy explosion and gunfire. There would certainly have been three attackers, the police said in Kabul.