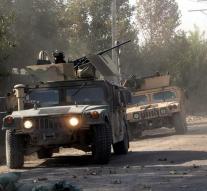 kunduz - The Taliban on Sunday invaded the Afghan city of Kunduz. According to local police, the Taliban fighters attacked the city from four directions and even managed them to enter the city. The local police units trying to reduce the Taliban.

Kunduz was a year ago to the Taliban. When the militants were again chased after two weeks by Afghan troops. Last month, the Taliban had also been the town of Tarin Kowt invaded in Uruzgan province. Also in Helmand province carried out the Taliban military operations in the provincial capital Lashkar Gah.