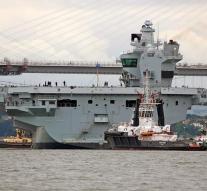 london - A brand new aircraft carrier with computers running on Windows XP. That saw journalists from various British media on a tour of Queen Elizabeth, who performed for the first time on Monday. It leads to concerns in the UK about the security of the ship against cyber attacks.

The British Defense Minister Michael Fallon told the BBC on Tuesday that the software on the new flagship was in order. 'Of course, it's not the system itself that's vulnerable, but security around it. 'Officers on the ship, which cost 3.5 billion pounds (4 billion) and designed more than 10 years ago, told journalists that Queen Elizabeth will have a team of cyber specialists on board.

Criminals launched an attack with the hostage software WannaCry last month, which hit many UK computers, including hospitals. The global attack was using a vulnerability that was also in Windows XP. The 2001 operating system has been unsupported for several years by Microsoft manufacturer.