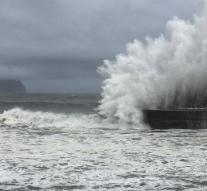 - Taiwan prepares for the first typhoon of the season. It is expected that the storm Nepartak Thursday night and Friday morning (local time) rages on the island.

Precursors of major depression reached the island already and a man were fatal. He disappeared in waves at a beach in Hualien in eastern Taiwan.

Is expected to have the typhoon wind speeds of well over 100 kilometers per hour. About a hundred passenger flights has been removed as a precaution. In the densely populated west of the island is Friday shut down the high-speed train. The country holds 30 000 soldiers on hand to pull out when needed.