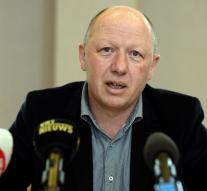 - A returned Syriëstrijder from Vilvoorde who got an anklet is Monday of the radar disappeared. So says the mayor of Vilvoorde Hans Bonte.

The Syriëganger was sentenced to a prison sentence but was placed under electronic monitoring instead. " Who gets it into his head to allow this in the present context ", grumbles Bonte Wednesday ?. " It is completely incomprehensible and irresponsible in times of terror threat in this way one loses sight of the returnees. "

The mayor wants Minister of Justice Koen Geens causes returned Syriëstrijders their " real " be punished. " These individuals can indeed move freely in society and monitoring fails completely. " Geens ' ministry was not immediately available for comment

Vilvoorde is not far from Brussels. The town is known for its relatively high number of jihadists.