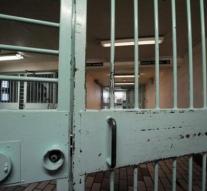 - A French prison guard is Sunday escaped death when he was attacked by a convicted Syriëganger. The attacker's victim was attacked with a sharp knife that he had made himself.

The attack took place in the prison of Osny, in a wing where stuck radicalized offenders, French media reported. Bilal T. reached out with his knife 25 centimeters long in the throat of a guard, when he was working with a colleague in his cell. He missed by a hair the carotid artery. The other guard was unharmed.

It is suspected that the attack was planned by several inmates, because a cell phone was found in another cell. There is a terror investigation started.


T. was found after the attack in his cell, spread his hands to pray. The cell door was smeared with blood from his victim. All of his arrest the jihadist was labeled as dangerous. He was arrested in Turkey on his way to the front in Syria.

There may be a connection between him and Larossi Abballa, the man the man who killed a two policemen in June in the French Magnanville. Abballa called in a video also execute jailers.