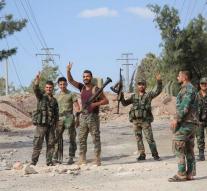 damascus - The Syrian army pulls its units and vehicles in stages back of the notorious Castello Street, bloody line between rebels and the army in the hotly contested city of Aleppo.

The step Thursday in Syria was reported by the Russian Lieutenant General Vladimir Savtsjenko. The rebels have yet to begin, according to him with the withdrawal of their troops from the front line. The mutual withdrawal should enable the delivery of goods and food for the people of Aleppo.

The Pentagon, to have the US Department of Defense, said no evidence of the withdrawal of Syrian troops. It showed himself satisfied about the fact that the cease-hours persists. There are violations, but all in all is going well, according to the US