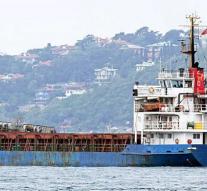 hannover - In court in Hanover, Germany on Wednesday the lawsuit against a 34-year-old Syrian people smuggler. Who is held responsible for two journeys across the Mediterranean Sea together with more than a thousand displaced people from Turkey to Italy.

Along with some companions he would have organized transports overcrowded cargo ships from the Turkish port city of Mersin. The refugees paid since 4400 to 6,000 euros per person.

With the cargo ship Blue Sky end of 2014 796 people were brought to Puglia in southeastern Italy. With the freighter Azadeen 360 asylum seekers were then briefly deposited on the Calabrian coast in southern Italy.


The Syrian was arrested in Germany. He spent as an asylum seeker in Hanover.