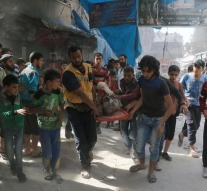 The plan, which covers only the month of October, is intended to provide relief for beleaguered 29 or difficult to reach areas. The government has approved assistance for 25 of those spots. However, in the east of Aleppo and three rural areas in the province of Damascus wants the regime does not allow emergency.