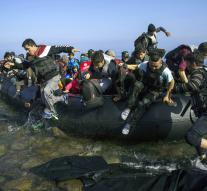 budapest - Turkey and the European Union have agreed on behind the scenes which are transferred between 400,000 and 500,000 Syrian refugees from Turkey to EU countries. This suggested Wednesday the Hungarian Prime Minister Viktor Orban in a speech in Budapest.

Orban said the EU Member States are under pressure to take on some of these refugees, but Hungary does not want.

Orban said the plan to alleviate the plight of Turkey with respect to the large numbers of displaced Syrians, is older than the Turkish- European Summit on 29 November on the migratory flow. The plan already circulating on the migratietop of European leaders in Malta on November 12, said the Hungarian government. The plan is then as Orban disappeared in a drawer, but he fears that Turkish and European leaders this week again get on the table.