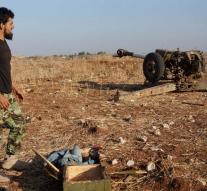 moscow - The Free Syrian Army has agreed to meet with officials from the Russian Ministries of Foreign Affairs and Defence. That in any case, Russian media reported Thursday.

The meeting would take place late next week in Abu Dhabi. The message is remarkable. Russia is an ally of Syrian President Bashar al-Assad, where the rebels of the Free Syrian Army fighting.