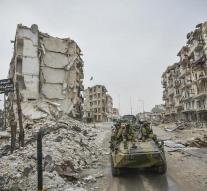 damascus - The cease-fire in Syria once again proved shaky. Twelve of the rebel groups as moderate reputable Free Syrian Army have withdrawn from the negotiations leading to genuine peace talks. They accuse the government forces, including allies that they have violated the ceasefire.

With the aid of Russia and Turkey came about truce went into Friday, but completely spotless which does not expire. The rebel groups of the Free Syrian Army accuse government forces of violations of the ceasefire in the region of Wadi Barada, northwest of the capital Damascus. In recent days there has been heavy fighting. Wadi Barada has springs that supply fresh water to millions of residents of Damascus.