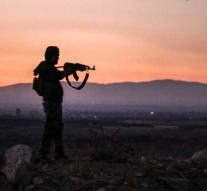 amman - Syrian rebels have reached an agreement on a truce and a phased surrender after a fierce battle on the border with Jordan.

Their spokesperson Ibrahim Jabawi reported that Friday after peace negotiations between the Syrian opposition and Russian negotiators. Russian military police will guard the border with Jordan near the town of Nasib.

In the southwestern region of Syria, a fierce battle has taken place in recent weeks for one of the last positions of the rebels. The aim of the fighting around the place Daraa was to bring the area back under the control of the Syrian government. The rebels prefer to see that Russian military police have the authority in the area than the government troops of President Bashar al-Assad.