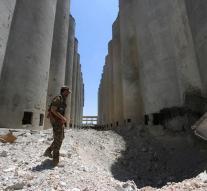 - Syrian opposition calls for a suspension of the bombing, which led the US are performed at Manbij by the coalition. According to the Syrian Observatory for Human Rights, there are already 77 people in recent days by air strikes killed.

The head of the Syrian National Coalition, Anas al-Abdah, calls to abandon the coalition partners in the bombing, to investigate the damage and recover the bodies. He also said that civilian casualties as a result of terrorist organizations by the US-led bombing played in the map.

The bombing Monday and Tuesday were carried out by the French and US Air Force. Monday arrived while 21 civilians. Tuesday, 56 people were victims. Among them eleven children.


The offensive by Syrian rebels, backed by air strikes from the coalition to liberate Manbij IS, began in May.