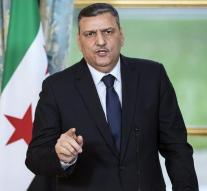 geneva - A prominent Syrian opposition leader has taken to the UN Special Envoy for Syria, Staffan de Mistura. The diplomat said earlier that the opposition should accept that they did not win the conflict in Syria.

The words of the diplomat fell badly at the opposition. The chairman of the High Negotiation Committee (HNC), Riyad Hijab, said on Twitter that 'The Mistura statement shows that UN mediation failed. 'He added that' the Syrian revolution continues. '

Hijab, a former Syrian prime minister, complained that the UN Envoy has made more 'uninformed' statements about the situation in Syria. He called the UN to 'a new approach' of the conflict without going into detail.