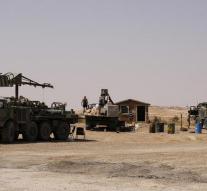 amman - US-based armed forces in Syria have conquered a large gasfield on Islamic state in Deir al-Zor. The tensions are rising in the eastern province. The Syrian Democratic Armed Forces (SDF) and Syrian army have been involved in a race to conquer the area on IS, which threatens a new confrontation.

A commander of the SDF reports that the Conoco field has been taken after a day-long battle. The gas field lay east of the river Euphrates. Militia of the Syrian government is also actively supported by Russia. According to the commander, they are not yet four kilometers away from SDF statements.

Russia warned the US on Thursday that retaliatory actions follow when government forces are taken under fire by US-backed militias. According to Russia, that has happened twice.