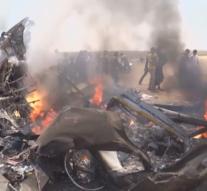 - A Syrian organization wants to exchange the bodies of the occupants of a Monday downed Russian military helicopter for the freedom of imprisoned supporters.

The General Foundation for Prisoners Affairs, as the group calls itself, moreover, demands an end to the siege by Syrian government forces. In the besieged places to be delivered more relief supplies.

When the declaration had issued the foundation Thursday she added images of suspected identity of the killed Russians. Monday above the rebellious northern Syrian province of Idlib in the air shot helicopter had three crew members and two soldiers on board. None of them survived the crash.


The Russian army is fighting side by side with the forces of President Bashar al-Assad against the rebels in Syria. Moscow or Damascus as yet responded to the offer of the foundation.