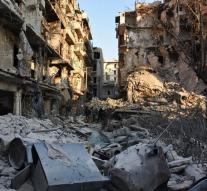 - 'Inadvertent human errors' have cost in September fifteen warriors life who fought on the side of the Syrian army. They were mistaken for militants of Islamic State and attacked from the air by the US-led coalition fighting against the terror movement.

Researchers at the US military acknowledged Tuesday that the air raid on September 17 was a result of human acres. They explained that among other mistakes made in the identification and contacts with Russia.