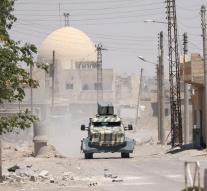 amman - The coalition led by the United States on Sunday brought down a Syrian army aircraft carrying out attacks on Raqqa attacks on units of the Islamic State terrorist group. The Syrian army has communicated this.

The pilot of the dropped device is missing, according to a statement read on the state television. The army spoke of a 'flagrant attack' and warned that these could have a dangerous impact on the fight against terror.