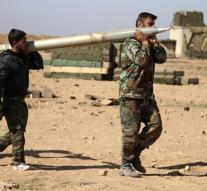 beirut - The Syrian army, with the help of Iran-supported militias, gained control over the oil and gas fields of al-Daylaa and Zamla in the southwest of the province of Raqqa on Monday. Islamic State has been forced to withdraw from this desert area in recent weeks. On Saturday, Wahab, Al-Fahd, Dbaysan, Al-Qseer, Abu al-Qatat and Abu Qatash were refurbished.

According to the Syrian Observatory for Human Rights, the forces of President Assad and their Iraqi and Lebanese allies financed by Iran are now racing up to the mountain range Jabal al-Bishri, 55 kilometers west of the city of Deir al-Zor. That area is another important refuge for jihadists.

The Syrian state media reported that Russian fighter planes already carried out bombs near al-Sukhna, on the southern access road to Deir al-Zor.