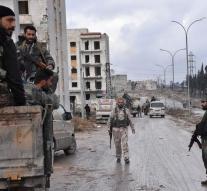 damascus - Syrian government forces have recaptured rebel again part of Aleppo. The Syrian Observatory for Human Rights reported Saturday that the troops of President Assad al-Bab district after heavy fighting have captured in the northeast of the metropolis.

The Syrian army continued in mid-November a major assault on the eastern part of the city. According to the United Nations in recent days, tens of thousands of residents of Aleppo fled the violence.

The heavily disputed city of Aleppo is located in northwestern Syria. It is the largest city in the country with a population of approximately 2.7 million people. Rebel movements were mainly the east of the city-owned. The government army has over the past two weeks, significant parts recaptured.