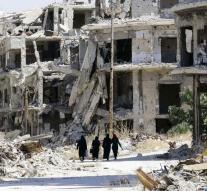 - "The Syrian army terminate the cease-fire was in force since Monday last week. " Terrorist groups \"have not kept to the agreements, complains the government army."

"The rebels would have violated the file hundred times. She turned, according to the army to rearm."