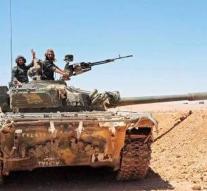 beirut - Syrian government forces have resisted the fate of Islamic state warriors near Homs. To the east of this city, the terrorist organization controlled another small enclave. That's over now, a spokesman said Friday.

'The military operation in the east-east region of Homs has been completed. The last groups of terrorists have been disabled and an area of ​​1800 square kilometers has now been released from IS, 'the statement was.