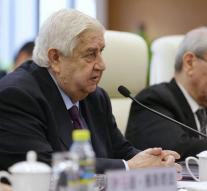 - The Government of Syria is willing to engage in peace talks on Syria. The foreign minister, Walid al-Moualem, which has said Thursday during a visit to China. He meets his Chinese counterpart there.


At the international level talks on peace in Syria. Including the United States, Russia, the European Union and neighboring countries of Syria to take part there.
In October and November there was high agreement in Vienna, where countries such as Iran, Saudi Arabia and Turkey were also present. In January, following in Geneva under the auspices of the UN a dialogue between the Syrian government and rebels in the country.
NEW